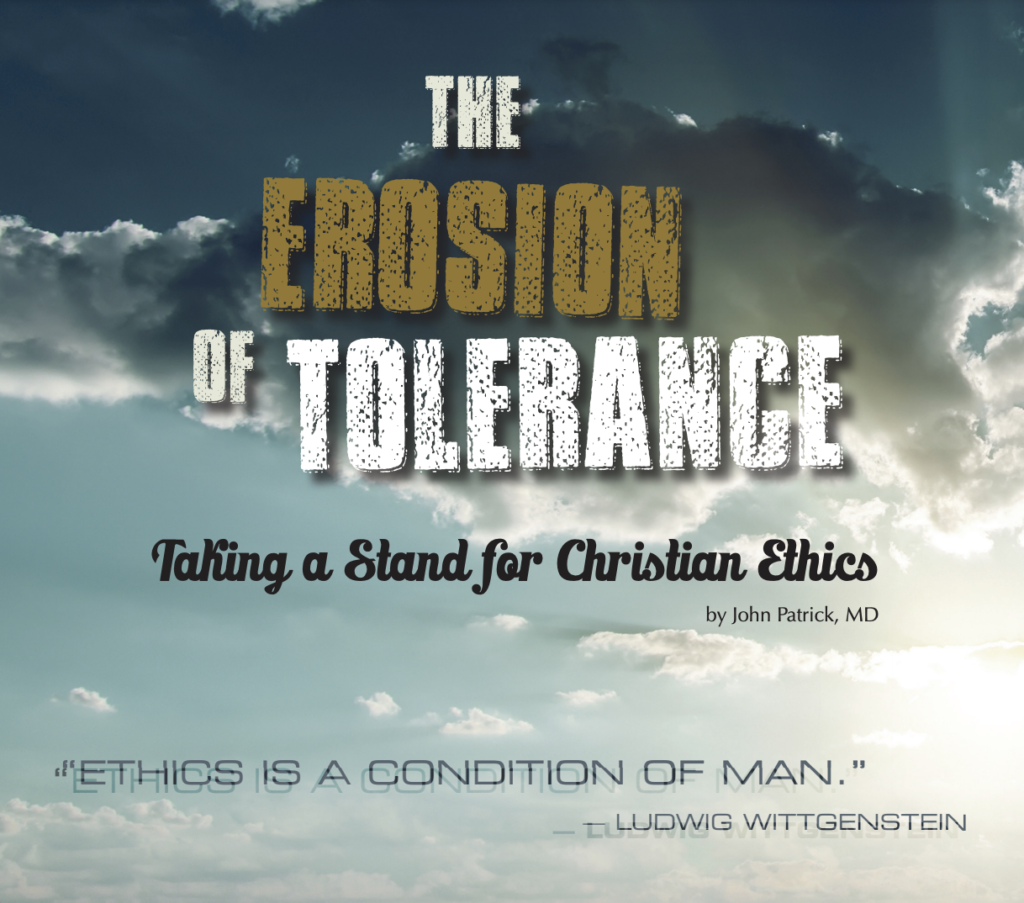 Human societies need the general acceptance of the rule of law if they are to function, and that acceptance has to be deeply rooted if they are to flourish. The law easily defines what we will not tolerate. (With more difficulty, it can also define some more positive commitments.) When these intolerances become second nature, we forget their origins and simply obey them as though they were inborn. (The Bible teaches that some things are written on the heart, but it also teaches the importance of childhood education pre-eminently by telling the stories of God’s people which writes ideas of moral consequence onto a child’s heart, making some actions morally unthinkable.) The result of this sort of intolerance is paradoxically freedom.

An example will serve to make the point and also raise questions about how we are debasing our society by false choices. When I was a boy growing up in blue-collar, industrial Birmingham in the United Kingdom in the 1940s, there were no attacks upon women on those back streets. We were not taught that we should behave like that; it was a given. My mother was a popular speaker for women’s groups and often came home after dark; we had no car so she traveled by bus and then walked for 10 minutes through semi-darkened streets to get home. My father never thought about it because there was no risk. If anyone did threaten her, one scream would have produced a crowd of men and the offender would be lucky to escape intact. Boys learned to be men by watching their fathers who taught ethics without even knowing the word. It was simply our way of life. There was little or no divorce so dads were there to raise their children, especially their sons. Today we know by bitter experience how important fathers are because fatherlessness is a major factor in producing sons who are highly likely to become criminal.

The importance of a shared narrative transmitted within the family has a long history, from Deuteronomy to the comparatively recent past. The norm was to teach the historical narrative of the children of Israel generation by generation in all the settings of family life. The object was to inculcate a way of life, but the history was often forgotten with disastrous consequences. Currently we are ruled by an elite who take perverse pleasure in marginalizing the story that made "the West" possible. Michael Polanyi, who had to flee both Communists and Nazis, had reason to wax eloquent:

In order that a society may be properly constituted there must be competent forces in existence to decide with ultimate power every controversial issue between two citizens. The adherents of a great tradition are largely unaware of their own premises, which lie deeply embedded in the unconscious foundations of Practice...if the citizens are dedicated to certain transcendent obligations and particularly to such general ideals as truth, justice, charity and these are embedded in the tradition of the community to which allegiance is maintained, a great many issues between citizens, and all to some extent can be left—and are necessarily left—for individual consciences to decide. The moment however a community ceases to be dedicated through its members to transcendent ideals, it can continue to exist undisrupted only by submission to a single centre of unlimited secular power.1

There is no doubt that our tradition has been suffering from erosion and reduction for some considerable time. (C.S. Lewis was aware of it even during World War II as The Abolition of Man demonstrates.) The fulfillment of Polanyi’s predictions are also apparent all around us as government intrudes further and further into what used to be private life. The Obama administration’s cavalier disrespect of the right of conscience is the most egregious example and an extremely serious one. Only a self-understanding, rather arrogantly calling itself progressive but in fact better described as ignorant, would wish to confine any expression of the Christian faith to the private sphere and close down any possibility of democratic dissent. This is foolish.

There are multiple examples of this mindset. The misuse of science as scientism is one important example. One brief example must serve as an illustration: for most of the last 150 years, some scientists have been pushing the view that science is all we need and only policies based on scientific studies ought to be accepted. This is remarkably foolish. We cannot give a scientific account of our own consciousness, but we must presume the validity of our own sense perception to do science! Again Lewis expressed it succinctly: "If nothing can be assumed nothing can be proved."2 Western science has been the beneficiary of a history made possible by the Christian church. It was growing and active for centuries before the so-called enlightenment happened (I prefer to call it an endarkenment). There is a very readable account in chapter two of Rodney Stark’s book For the Glory of God, and The Genesis of Science: How the Christian Middle Ages launched the Scientific Revolution by James Hannam provides a wonderful account of some of the central actors.

Attempts to explain the dominance of the Western world over the rest for the last 500 years have resulted in a considerable wealth of literature, but of particular interest is the recognition by some academic scholars of a secularist outlook that it really does look as though Judeo-Christian culture played a critical role. Names like Allan Bloom, Jürgen Habermas, Robert Fogel and Niall Ferguson come to mind. It looks as though you cannot have Adam Smith’s economics without Adam Smith’s ethics! Or as Habermas put it, "Anyone who does not acknowledge that our ideas of justice come from the Jews and our ideas of compassion come from the Christians is simply ignorant."3

We lived for many centuries within a developing narrative, not of rights so much as of responsibility, which is rooted in the attempt to work out our own salvation with fear and trembling and to constantly develop a renewed mind. This, of course, does not apply to everyone in a personal way, but Christendom was real and while it endured facts and values were related. Only after the reductionism of the so-called "enlightenment" did things fall apart. As Lewis explained, the basic phenomenon is more often for first and second things to be wrongly ordered rather than downright wrong.4 The problem is very apparent in the teaching of ethics to healthcare students. Almost all of them are taught the Georgetown Mantra: autonomy, justice, beneficence and non-maleficence. No discussion of the interaction between these goods is usually undertaken, yet it makes all the difference in the world. Most students place autonomy first, but they don’t think about it. Autonomy without a framework is called anarchy and no one wants that. I would argue that the foundation is non-maleficence because that can be legislated and from it the real goods of beneficence are easily deduced. The framework of God-given law is necessary for justice to be possible. Without the fear of God, judges are vulnerable to the illusion that they make the law rather than discover it within the framework of given law. Only with these things in place is real freedom possible. In all our mentoring activities, we must constantly reiterate that freedom for us is the ability to do what is right, what we know we ought to do, not the freedom to do what we wish. This freedom to do what we ought only comes about as we work out our own salvation by the daily development of habits of the heart—prayer, confession, repentance, worship, Bible reading and fellowship.

Now with these things in place, we ought to be able to witness to what we know. We ought to be able to withstand the attempts of the liberal elite to intimidate us into silence by false accusations of intolerance or more insultingly of bigotry. Legitimate intolerance is essential to social functioning, so the response is; "Yes, I am intolerant. Now, can we discuss whether my intolerance is legitimate?" As to bigotry, we need to ask what definition they are using and suggest that it is the inability to see the other person’s point of view which usually makes the complainant the bigot. Again, the outcome must be free speech which closes down fools because their positions are indefensible.

In his book Christian Ethics and Contemporary Moral Problems, Michael Banner shows us how to engage the modern world with explicitly Christian accounts of the sanctity of life, the family, sexuality and biotechnology. Our need is to learn to show that the Word of God, Jesus Christ, comes upon history, as it is humanly conceived, as an abrupt and unanticipated word utterly unavailable from philosophy, natural sciences and historical knowledge but whose impact is utterly undeniable in both individuals and cultures. David Hart expresses it inimitably thus:

"I am the Lord thy God," says the First Commandment, "Thou shalt have no other gods before me." For Israel, this was first and foremost a demand of fidelity, by which God bound His people to Himself, even if in later years it became also a proclamation to the nations. To Christians, however, the commandment came through—and so was indissolubly bound to—Christ. As such, it was not simply a prohibition of foreign cults, but a call to arms, an assault upon the antique order of the heavens, a declaration of war upon the gods. The entire world was to be evangelized and baptized, all idols torn down, all worship given over to the one God who, in these latter days, had sent His Son into the world for our salvation. It was a long and sometimes terrible conflict, occasionally exacting a fearful price in martyrs’ blood, but it was, by any just estimate, a victory: the temples of Zeus and Isis alike were finally deserted, both the paean and the dithyramb ceased to be sung, altars were bereft of their sacrifices, the sibyls fell silent and ultimately all the glory, nobility and cruelty of the ancient world lay supine at the feet of Christ the conqueror.

Nor, for early Christians, was this mere metaphor. When a gentile convert stood in the baptistery on Easter’s eve and, before descending naked into the waters, turned to the West to renounce the devil and the devil’s ministers, he was rejecting, and in fact reviling, the gods in bondage to whom he had languished all his life; and when he turned to the East to confess Christ, he was entrusting himself to the invincible hero who had plundered hell of its captives, overthrown death, subdued the powers of the air and been raised the Lord of history. Life, for the early church, was spiritual warfare, and no baptized Christian could doubt how great a transformation—of the self and the world—it was to consent to serve no other god than Him whom Christ revealed.5

It is to this great tradition that we must introduce our young and mentor them in it. The tea party movement recognizes that we have too much government but neglects to say that we had a better government when Americans adhered to ideas of right and wrong which came from "The Book" rather than from some half-baked political science class. When duty rather than entitlement formed us. (This, of course, is another article, but please read Roger Scruton’s The Good of Government if you are interested in more information.)