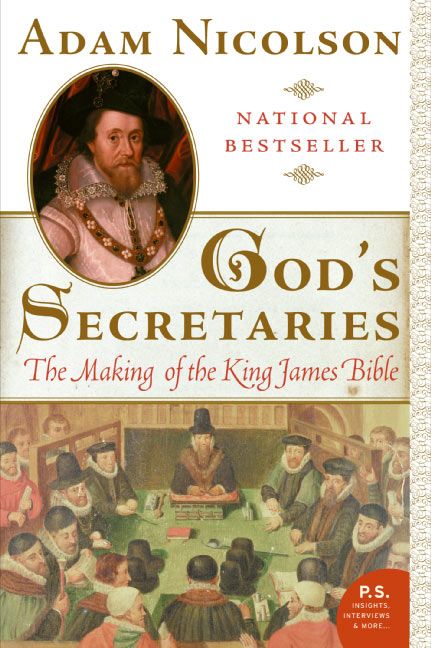 I have been meaning to read this book for close on twenty years.  Covid made it possible.  It is a beautifully written book both nuanced and sonorous.  The history of the King James’ Bible is compelling reading with a peculiar compulsion; one has to stop and meditate frequently.  The secretaries of the title were classical scholars but by no means of spotless behaviour.  Their submission to the King is nauseating but they approved of what he wanted;  a translation of the Bible that could serve the whole population that would include everyone.  To a remarkable degree, it did that but not immediately.

In the mid-sixteenth century Nicolson says perhaps 30% of the gentry were illiterate, by the 1620s it was effectively zero.  For the lower classes it was worse; in the 1640s 55% of yeoman farmers were illiterate  and  labourers  95% . But especially in London and amongst the Puritans who ate and drank the word of god literacy rapidly became the norm.

The King James Bible was meant to be read in public and everyone was required to go to church, modern secularists would call this indoctrination but the bible became the book which gave England and New England their particular character, inviting in Bloom’s lovely phrase, everyone into a common story of meaning because that is what a community is. The King James Bible slowly pushed the Geneva bible out for precisely these cultural reasons.  God’s secretaries judged their work by reading it aloud to their peers.  It is a text with rhythms and vocabulary that are redolent of the majesty of God.

The translators honoured Tyndale who had worked in secrecy and was ultimately horribly destroyed by Thomas More.  Tyndale gave us the most beautiful  phrases from 1 Cor.13, The Lord’s prayer and the account of the last supper, and contributed more than any of the “ secretaries”.  But what he produced was a simple and plain man’s version “to be slapped in the face of the medieval church and its power-protective elite”.  The KJV adds, not content  so much  as richness of resonance and musicality.  T.S.Eliot described it as an ‘appeal to the auditory imagination’, that ‘feeling for syllable and rhythm, penetrating far below the conscious levels of thought and feeling, invigorating every word’.  But it did far more than that it gave us metaphorical foundations.

At the end of the book is a lament for a nation and the culture of the western world.  Church is mainly banal; it does not engage with the questions to which the answers are a way of life.  The authentic truth of the scriptures is not acknowledged by the liberal elite who control our world. Nicolson, who is neither church goer nor atheist, puts it like this; It is impossible now to experience in an English church the enveloping amalgam of tradition, intelligence beauty, clarity of purpose, intensity of conviction and plangent, heart –gripping godliness which is the experience of page after page of the King James Bible.